Global market sentiment continued deteriorating this past week. On Wall Street, futures tracking the S&P 500, Nasdaq 100 and Dow Jones weakened by 2.97%, 4.49% and 2.81% respectively. For the S&P 500, this meant a 7th consecutive weekly losing streak. That was the worst consistent performance since 2001.

Risk aversion did not mean another strong week for the haven-linked US Dollar, which weakened the most since late January. As a result, some of its major peers outperformed. These included the Euro and British Pound. In fact, GBP/USD rose over 1.9% in the strongest weekly return since the end of 2020. The Australian and New Zealand Dollars outperformed as well.

It seems there were growing concerns about a US recession down the road as the markets priced out some Federal Reserve tightening in 2023. Treasury yields continued to level off, with the 10-year seeing its worst 2-week performance since November. Weakness in the US Dollar and government bond yields meant gold prices shined, gaining 1.9%.

The economic docket notably picks up in the week ahead. FOMC minutes will be closely eyed, which could uphold the Federal Reserve’s hawkish stance. The central bank will also be eyeing its preferred gauge of inflation, PCE core. As such, these events could continue threatening general risk appetite.

The New Zealand Dollar will be awaiting the RBNZ rate decision. A 50-basis point rate hike is expected to 2.00% from 1.50% prior, with more to come in July. A federal election in Australia might do little to influence the Australian Dollar given the policies being prescribed by the two major parties. What else is in store for markets in the week ahead?

US DOLLAR PERFORMANCE VS. CURRENCIES AND GOLD 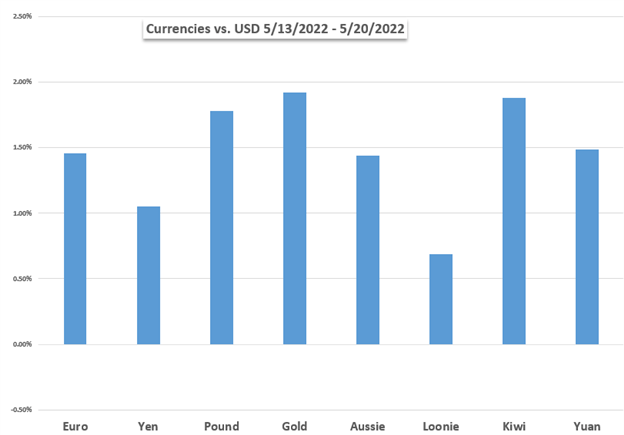 The Canadian Dollar is backed by one of the most aggressive central bank rate forecasts amongst the majors while growth forecasts are holding up pretty well. Despite that, the currency has generally performed well. Could this over-stretched optimism set the Loonie up for a reversal?

Australian Dollar Outlook: It’s All About the Big Dollar

The Australian Dollar has a sound economic story, but with the Fed racing against time, the US Dollar is soaring. Will AUD/USD continue to bounce off recent lows?

GBP/USD is up over 2 big figures on the week as Sterling continues to battle back from its recent two-year low.

US Dollar Outlook: Recession Woes Take Their Toll, but USD May Prevail Anyway

The US Dollar lost its footing last week as markets grew more concerned about a recession. FOMC minutes and the Fed’s preferred inflation gauge could offer the USD some life ahead.

S&P 500 a Whisker Away from Technical Bear Market, Nasdaq Lower

The S&P 500 has been flirting with the 20% decline from the January high while the Nasdaq weekly chart appears oversold, suggesting a slow-down in the sell-off next week

US crude oil is not simply biding its time amid more active conditions in the broader financial system. The commodity continues to exhibit significant realized volatility and has played out 10 to 15 percent swings in one to two week clips. Yet a decisive trend remains allusive.

US Dollar snapped a six-week rally into resistance and threatens a deeper pullback within the broader uptrend. The technical levels that matter on the DXY weekly chart.