The British Pound soared on Tuesday, buoyed by broad-based U.S. dollar weakness, but more importantly, strong UK economic data. In late trading during the New York session, GBP/USD was up 1.3% to 1.2482, posting its largest single day rally since October 2020.

Earlier today, UK employment figures showed that the country added 83,000 workers in February, beating expectations for a net increase of 5,000 jobs handsomely. With this result, the unemployment rate fell 3.8% to 3.7%, hitting its lowest level in nearly half a century.

Although a single report does not substantially change the overall outlook, today’s data have helped ease concerns that the economy is heading for a significant downturn and have increased the likelihood that the Bank of England will have to raise interest rates more forcefully to ensure that rising nominal wages, a product of labor market tightness, do not exacerbate already very high inflation.

Sterling is also being supported by external forces. The greenback’s widespread decline in the foreign exchange market, triggered by improved sentiment, is also benefiting riskier currencies, which have sold off in recent weeks on fears that the global economy could fall off the cliff and remain stuck in a stagflationary environment.

Looking ahead, FOMC Chairman Jay Powell has ruled out more aggressive interest rate hikes, so we may have reached peak Fed hawkishness for now, barring new surprises on the inflation front. This may cause Treasury yields to top out around recent highs, depriving the US dollar of a key bullish catalyst.

Meanwhile, the BoE, with its credibility on the line and CPI heading to double digits in the second half of the year, could start tightening rates more forcefully to restore price stability. In fact, markets are pricing in a 30% chance that the bank will resort to a 50 bprate hike at its June meeting following today’s employment data (bets could consolidate in the coming days). Against this backdrop, GBP/USD could move higher in the near term, but sustained gains are unlikely given current headwinds faced by the UK economy.

In terms of technical analysis, GPB/USD has broken above a key ceiling in the 1.2400 area. If buyers maintain control of the market in the coming sessions, we could see a move towards 1.2650 in short order. On the flip side, if sellers return and drive the exchange lower, initial support lies now at 1.2400. On further weakness, the focus shifts down to the 2022 low around 1.2165. 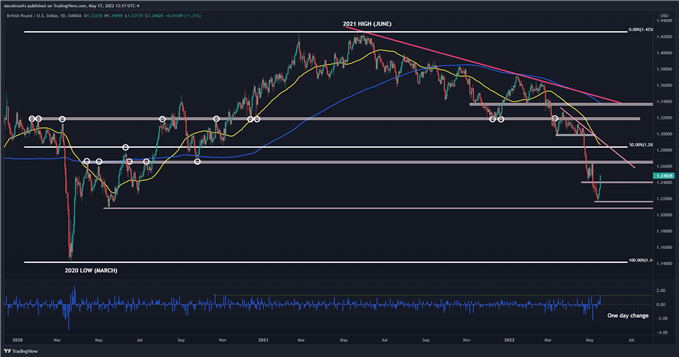 Australian Dollar Tries Lower After RBA Hike by 0.50%. Where to for AUD/USD?

Cointelegraph admin - July 5, 2022 0
The domino effect of the 2022 bear market, which saw the downfall of numerous crypto ecosystems and tokens over several months, caught up...

Tron’s USDD Regains Stability After Tapping an All-Time Low at $0.92...

Circle’s USDC on track to topple Tether USDT as the top...

Tron’s USDD Regains Stability After Tapping an All-Time Low at $0.92...

Circle’s USDC on track to topple Tether USDT as the top...