Brent crude oil is trading lower this morning as recessionary fears trump traditional fundamental support influences. This morning brent crude received a barrage of supporting factors including PMI data from both China and Japan (among the worlds largest crude oil importers). China pushed back into expansionary territory for the first time since February while Japan’s reading improved on previous data (see calendar below).

Employee strikes in Norway commenced this morning as the oil and gas workers demand higher wages to combat inflationary pressures. The strike is expected to extend throughout the week with estimates projected to dent Norwegian supply by roughly 15% (Source: Reuters). Yet another supply-side issue does not bode well for global supply and more specifically OPEC+, who’s capacity is forecasted to decline rapidly as we head into the end of 2022 (see graphic below). 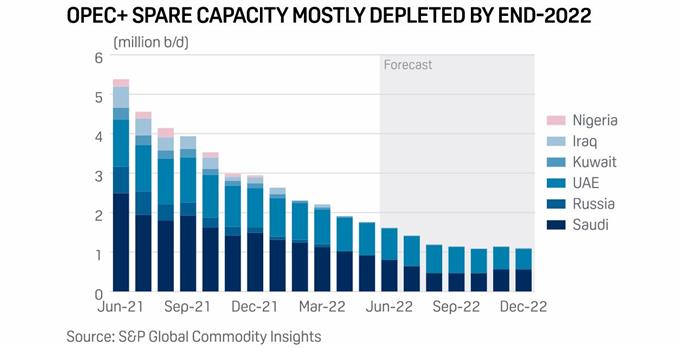 As has been the trend of recent, OPEC+ actual production levels on a monthly basis has been well short of projected supply numbers which adds to the tight market conditions going forward as I do not see this trend changing. Regardless, this mornings price action seems to have overlooked these fundamental factors in favor of the risk-off, recession backed narrative. 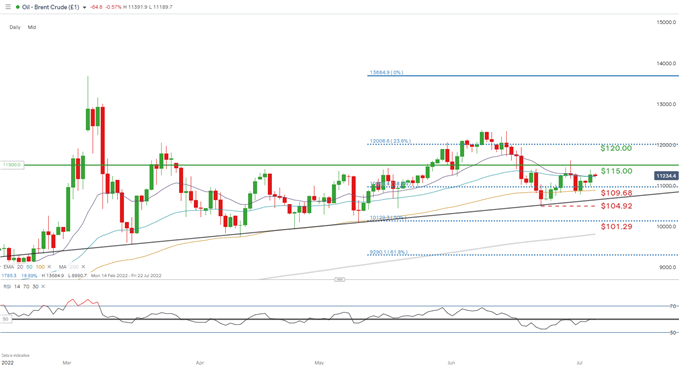 Price action on the daily brent crude chart shows indecisiveness by market participants starting from the Relative Strength Index (RSI) reading around the 50 mark. Although brent has incrementally swung higher, there seems to be no conviction supporting any particular directional bias. Much is dependent of fundamental catalysts such as an impending recession, Russia/Ukraine and OPEC+. For now the elevated crude oil prices will remain in my opinion until such time as the medium-term trendline support line (black) is breached.

IGCS shows retail traders are marginally NET SHORT on Crude Oil, with 52% of traders currently holding long positions (as of this writing). At DailyFX we typically take a contrarian view to crowd sentiment however, after recent changes in positioning we settle on a short-term cautious bias.