The Australian Dollar remains on its knees against the US Dollar, but it is reasonably stable against most other major currencies. The strong US Dollar is a function of the Federal Reserve that is all set to aggressively hike rates this week.

The Fed has telegraphed that a 50 basis-point (bp) increase in rates is imminent and several more lifts of 50 bp are coming down the pipe. This is a central bank that appeared to be dismissive of high inflation prints until recently, as they were viewed as ‘transitory’.

The issue of ‘cost push’ inflation being temporary would have merit in normal circumstances. The current environment is anything but normal.

Supply chain bottle necks are undeniably a problem and have caused prices to increase due to scarcity. These logistical problems are likely to remain with us for some time as China remains determined to hold on to its zero case Covid-19 policy.

So, while supply constraints linger and monetary policy is ultra-loose, as it is currently, then consumers will compete with each other for goods and services, further driving price inflation – inducting a vicious cycle of price pressures.

This is what the Fed has come to realise and is in the process of ‘front loading’ the hiking cycle. The RBA will be highly cognisant of this issue.

CPI has arrived and swept all before it. A headline rate of 5.1% will not sit easily with a central bank that has consistently delivered on its inflation target mandate of keeping inflation within a 2-3% band, on average, over the business cycle.

The evidence is in. Inflation is rampant and expectations are spiralling higher. The first quarter saw wage increases of 3.5% to those with awards tied to CPI that rolled over last quarter. Salaries are now set to increase by 5.1% to those awards rolling over in this quarter.

Colleagues that work in recruitment here in Sydney are openly discussing wage rises of much larger proportions in order to keep staff. Australia may well be at full employment and monetary policy remains extremely loose.

The Fed has hit the panic button to get monetary policy back to a neutral setting. The RBA has slightly more wriggle room than their trans-Pacific colleagues.

Having witnessed the catastrophe of delaying action, they are less likely to live in denial at their monetary policy committee meeting on Tuesday. As stated in this column over a month ago, the RBA May meeting is well and truly live.

For the Australian Dollar, a more hawkish RBA than expected could provide short term support, but US Dollar direction would seem likely to dominate markets in a week when the Federal Reserve is making a move. 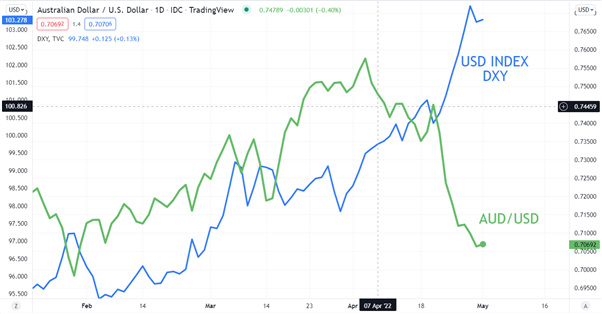 Bitcoin (BTC) admin - May 23, 2022 0
Bitmex co-founder Arthur Hayes is not going to prison for violating the U.S. Bank Secrecy Act. Instead, the former crypto exchange CEO has...